I've just returned from the annual SEIT https://seitoutbackaustralia.com.au/ trip to climb Mt Woodroffe, the highest peak in South Australia. There were 15 guests on the trip and everyone was on a State8 quest of some kind - why else would you climb such an obscure mountain? SEIT only run the trip once a year and cap it at 25 guests (or 15, as they use 10-seat offroad buses). You need to book well in advance through their travel agent Diverse Travel https://www.diversetravel.com.au/. I asked a few of the tour guides if the trip was an annual pain in the butt, or something they looked forward too - the answer was universal that it was a major highlight and something the SEIT team all tried hard to get on to.

We were picked up in a 4x4 Mercedes bus from Yulara on Friday morning and driven south on pretty obscure tracks over the border into SA where the APY permit-only lands begin. SEIT has a pretty exclusive use of the area, being the only permit holding tour group. I learned that the owner of SEIT has spent many years touring the area and had gained the trust of the local land holders, and he works hard to maintain that trust.

Our campsite was about 10Km from the base of the mountain, and you can see the now-abandoned aboriginal community below, with the peak to the left.

Recent fires and then rain had changed things up since the 2018 tour. The 'toilet' facilities had burned to the ground, but so had much of the spinifex on the mountain, which made climbing so much easier. SEIT has a semi-permanent camp setup with a shipping container kitchen, rain water tank and even showers.

Camping was in provided swags with your own sleeping bag down in the river bed. Were were told there would be plenty of notification if it rained, since we could see the source! Morning tea was provided en-route and lunch was had at the camp. In the afternoon, we were driven out to have a closer look at the mountain and plan our routes for the next day. There is no marked trail or even a commonly used 'goat track' (except the ones used by the local wallabies, donkeys and camels) - it only gets climbed once a year by humans. Noting that the spinifex had burned away, the direct approach looked like a pretty good option, so I checked around to the left/south anyway to see how that looked. 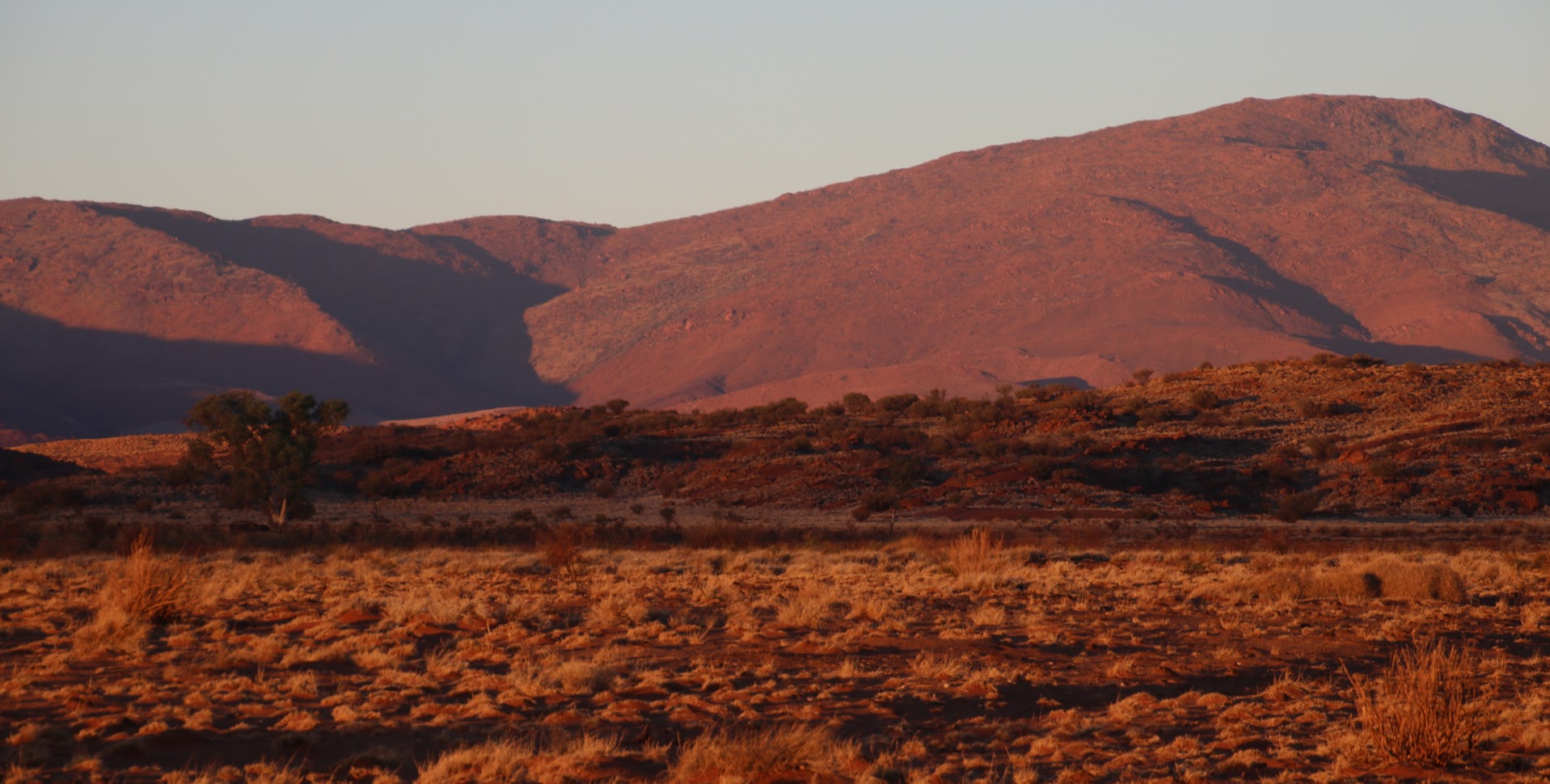 Next morning, we were up at 5am to maximize the daylight. We were told that climbing times varied from just over 4 hours to 13 hours (there is only 10 hours of daylight in May). UHF radios were part of the packing list, and most of us had one. Some small groups were formed and we all hit the mountain just as the sun came up. Myself, a fellow guest and one of the newer SEIT tour guides went up a little to the north for a mostly direct route up. The climb is only 750m, and the route we took was pretty good - no real scrambling, hardly any spinifex and the top was generally in view most of the way with a few false peaks. Some climbers reached the top almost an hour before us as they called into base that the top was windy and covered in cloud. By the time we reached it, the cloud had cleared. You can see Mt Conner, Uluru and Kata Tjuta from the top. 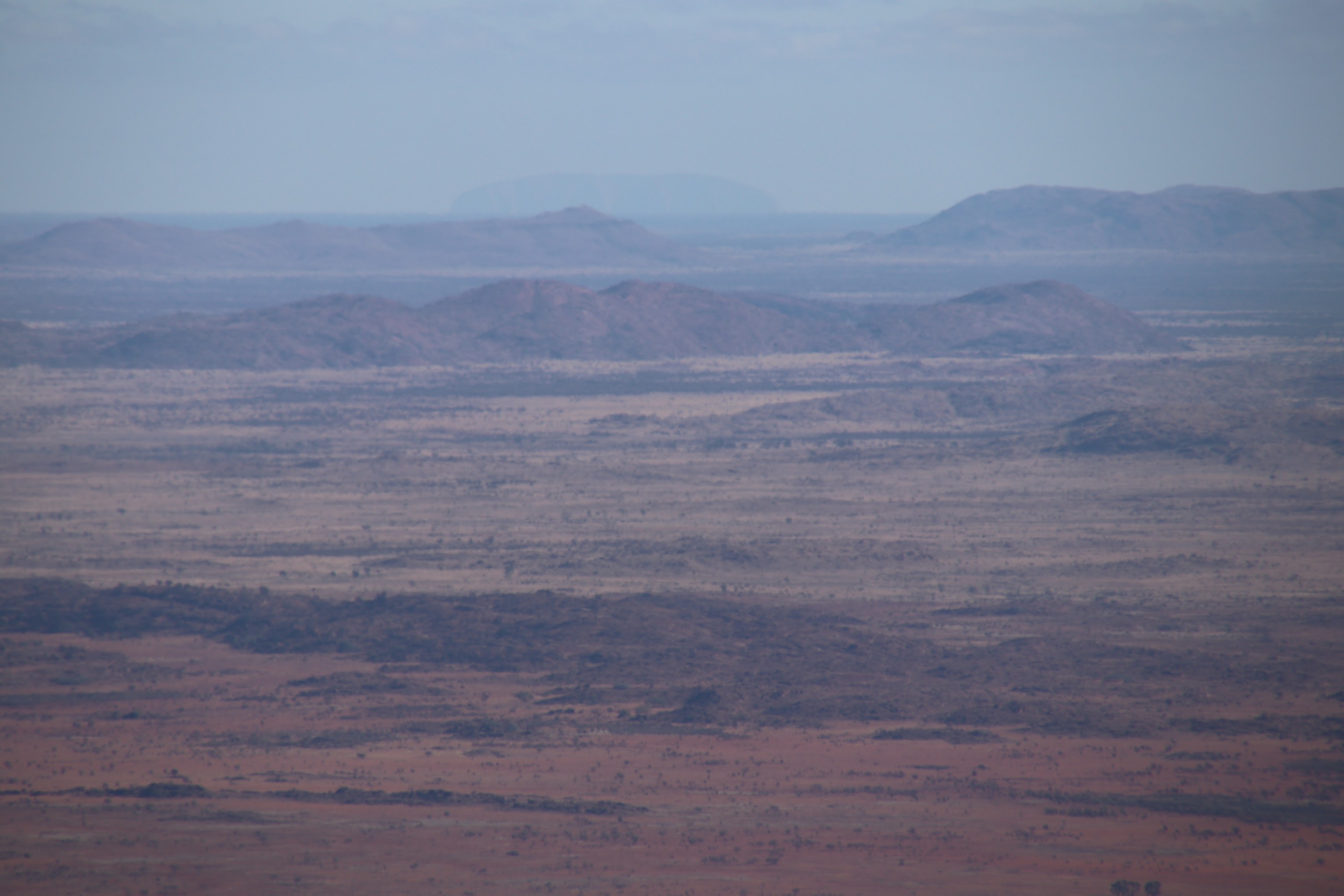 One thing I learned coming down, is that it's best to re-use the same route... We didn't, and took the 'scenic' route south, following a creek to keep away from the spinifex. It was a more arduous trek, but certainly more scenic. Almost at the bottom is a waterfall that is just that bit too high to negotiate, so backtracking was required to find another way down.

Everyone made it up and back safely, with only a few cuts and scratches and spinifex thorns. That night, we were fed BBQ corn, vegies, NT steak and stewed apples/custard and we all slept really well. The SEIT team were awesome and I would highly recommend the trip. The area is very typical remote, outback, red dust Australia, but there is 3G reception from the top of Woodroffe.
Brissy GH

Well done.
I did this tour in 2014 as part of my State 8 quest. A couple of us then climbed Mt Zeil a few days later. The SEIT guys were awesome and the tour was quite interesting.
Well done with the photos. Your route up and down the mountain is quite similar to mine.
Sleeping in a swag in the creek bed was nice. I woke up to a dingo just 1m from me lit up in the moonlight.