I started walking north on the Heysen Trail (HT) on May 15. Turns out I should have waited until May 16 as the trail closure for the fire danger season had been extended to May 15 (inclusive) but hey I'm not always the brightest. Anyway, for those unfamiliar with this trail it's closed every year Nov 1 - April 30 and that closure was extended this year. The extension meant I had to delay my start which was one of the reasons I went and did some walking on Kangaroo Island prior.

I walked through to June 5th when I arrived in Tanunda, covering about 330kms of the Heysen Trail. I had 4 rest days in this time and walked 17 days. I had hoped to do the whole thing in one hit but if you have seen my thread under the Equipment area of this discussion forum you will know that I found walking in the South Australian winter a bit wetter than was comfortable. I'm hoping to go back and finish the trail starting in the north in September and October. Maybe this year, maybe not.

I have a blow-by-blow aka day-by-day account of my walk on my Facebook page which is the easiest sharing platform I have found for using while I walk. It's a bit painful to scroll back through Facebook entries but if any of you are keen for a more detailed report my page can be found at www.facebook.com/ratherbebushwalking. With this report I thought I would stick to a bit of an overview on how I found it and information that might be handy to any of you thinking about giving it a go.

Firstly the Heysen Trail isn't your traditional "bushwalk" in that it's not all in the bush. I know from my research that this makes it less popular amongst some bushwalkers and I can understand that view. But for me I really enjoyed experiencing the gamut of landscapes that make up the Mount Lofty Ranges through the Fleurieu Peninsula. I have traveled in SA previously including through these areas but it's amazing just how much you miss when travelling in a car! So the trail passes through conservation parks which gives that touch of "wilderness" experience but also crosses private land, follows back country roads (mainly dirt) and forestry tracks through state forests as well as the odd footpath in towns. This variety of landscapes does have some interesting implications for the aspiring HT walker though.

I knew before I started that camping and water would be my two biggest challenges. Turned out I was nearly right - except the water I had issues with was that moisture vapour in the night sky. Ah well. Anyway, SA is of course notoriously one of Australia's drier states. And this past summer and autumn had been drier than usual. So I was prepared to carry more water along the way and indeed I did have to carry more, up to a full day or sometimes overnight for a dry camp. I'm used to being able to get water multiple times a day and like to hydrate well so I found myself carrying 3 to 4 litres on occasions. I do "camel up" at water sources but hate to run dry. I did find or obtain suitable water at least once a day and all the water tanks had some water in them. The water tanks were by no means full though and those at the dedicated HT campsites are only small. The ones at forestry campgrounds and in the conservation parks are bigger but car campers also have access and help themselves freely as well as wash their hands post toilet visit at the tanks. The horror! Haha. There was infrequent access to streams; sometimes these were simply fenced off on private property (with lots of barbed wire and "private property" signs between me and the stream) and sometimes even if there was access the water came with the added flavoring and attraction of marinated cow carcass or similar. In a pinch I will still drink that stuff both filtered and chemically treated and hopefully dosed with something like Tang but thankfully I never was that desperate. If it was a drier time of year or a drier season I imagine that I might have had to go knocking on the doors of some of the houses or farms I passed for water as it wouldn't take much more for those water sources I found to be dry.

Camping wise things were interesting. The Heysen Trail asks that walkers camp only in "designated areas" on the trail, but, as time went on, I found this less feasible. I never camped on private property as the relationship between the trail and private property owners is tenuous and precious but I started to get a bit more creative as I went. At the start the camping is all within Deep Creek and Newland Hill Conservation Park and the campgrounds offer pit toilets and water tanks and not much else (except for the dedicated walker Eagle Waterhole campground in Deep Creek that has a shelter and picnic table). The campgrounds in the conservation parks (and later state forests) are mostly targeted at drive in campers and that means compact ground in campsites, large groups of people, and where they are allowed campfires in the state forests every man and his dog and child and fireworks and alcohol and loud music and..... well you get the idea. The conservation parks charge up to $20 for the campsite for the night (I wasn't clear on whether I could have shared this fee if I shared the campsite but on my own I found this a bit steep) and you have to book online and commit to dates. The state forests charge $5 a night and you can only pay for this permit at the forestry office which you may or may not have arrived at by the time you want to camp. It's a pay station and you need exact money.... in cash.

Quite often there is accommodation available in places along the way - obviously the town stops but also in random places like the Heysen's Rest B'n'B in Myponga. Jane and Greg have two self contained cabins but also newly 4 king single bedrooms with ensuites in "donga" style which are quite affordable. This is lucky because there really is no where else to stay around there short of camping roadside which isn't my cup of tea. Jane and Greg are lovely by the way, I highly recommend a stay!

In other places where there were no accommodation options, no designated camping grounds, no caravan parks or other I decided that most conservation parks were fair game and if I looked hard enough I would find suitable spots (mostly "dry" camps though). Indeed most of them don't have "no camping signs" so what the rules are exactly I'm not sure and don't want to know either! I may have extended my creativity elsewhere which given I'm usually very much a by-the-book person it proved a novel experience for me. I'm kind of proud of myself for expanding my horizons. Haha.

The trail of course passes through or near lots of towns so there are quite frequent resupply (and hot meal/hot shower/coffee etc) opportunities. I sent myself packages care of the post offices (poste restante) with my breakfasts, dinners (I make my own) and other bits and pieces then bought my lunches and snacks in the towns to ensure variety and interest. One thing I did struggle a bit to find was gas for my stove. Victor Harbor has a camping shop with plentiful supplies but other than that as far as Tanunda I didn't find any. Given I get 15-21 days out of a 230g cartridge this wasn't a huge deal for me but it would be worth calling ahead (which was my plan) and checking stocks where you want to buy one and if you find them, asking for one to be held for you.

I saw only a handful of other walkers (day walkers or overnight) except around Mt Lofty and in Morialta Conservation Park. I rarely camped with anyone else except in the drive in campgrounds. Everyone was friendly though and I had no real issues anywhere or with anyone along the trail except I did get chased by three dogs which ran out of a house on a private property crossing. They weren't friendly but I ignored them and my calves escaped the encounter unmarred by canine toothmarks.

Navigation wise the official maps were quite sufficient although it's worth getting on to the official website and noting any re-routes as there were a few that I hadn't noted and made me have to think to follow given I hadn't put them on my map and had no internet access that day. The signage is pretty good but like any trail maps still need to be carried and used. I also used a navigational app as I'm lazy about pulling out the map sometimes and it made my days easier. I used the Hikerbot version and found it really useful. It's new and has the capacity for walkers to add feedback about sites etc and I tried to put the odd comment about current water tank levels etc on it to help others. Hopefully as others use it there will be more info on it. It can be used offline, but make sure you shut it down in between uses as it does use battery, just as most of them do. I have MAPS.ME on my phone as well with the HT data and that also was useful.

That's pretty much all I can think of that might be of some use or interest... feel free to hit me up with questions and if I can help I will. I will reply shortly to this post with a few photos to illustrate as I prefer typing on my computer but it's easier to load photos from my phone.
jobell 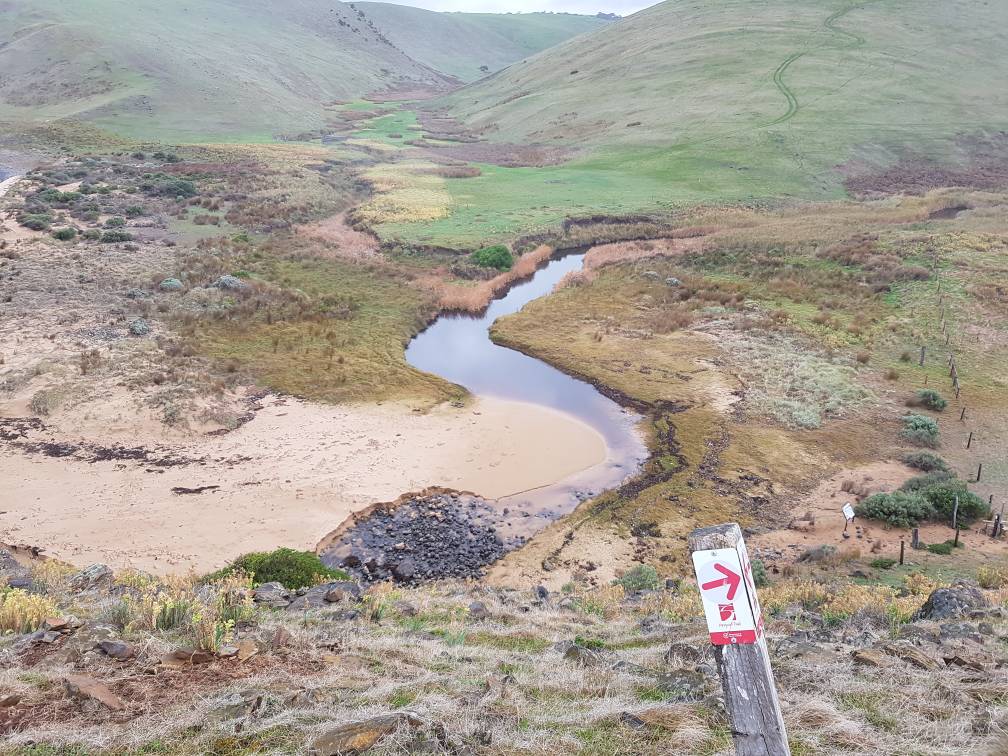 Stile but no fence, my favorite kind of style. Because I was wearing an AARN bodypack I found some stiles a little awkward. There are LOTS of stiles to cross on the HT. 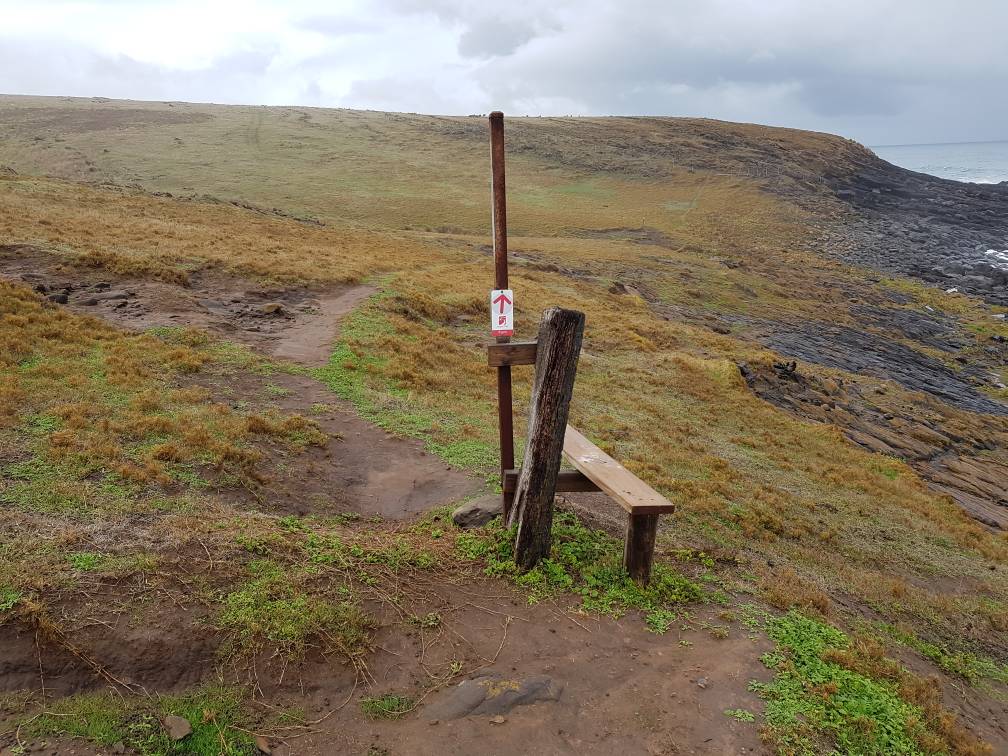 My tent set up at Robinson Hill campsite, a dedicated HT campsite whuch I believe is on private land by arrangement with land owner. Be prepared to share space with livestock. 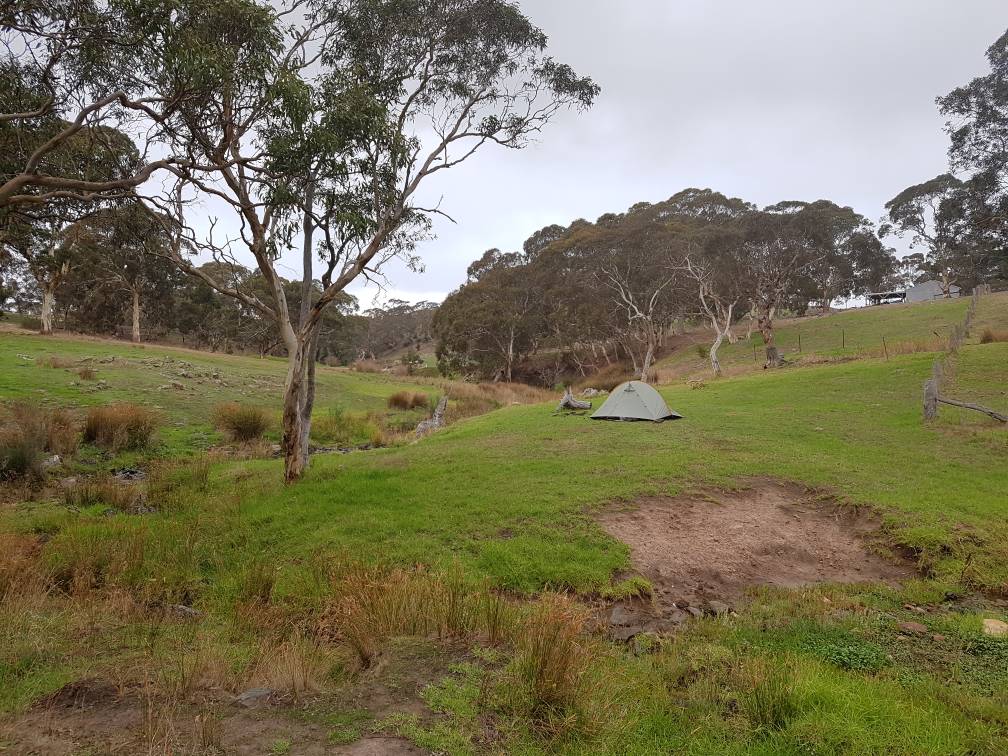 Autumn colors by the trail. 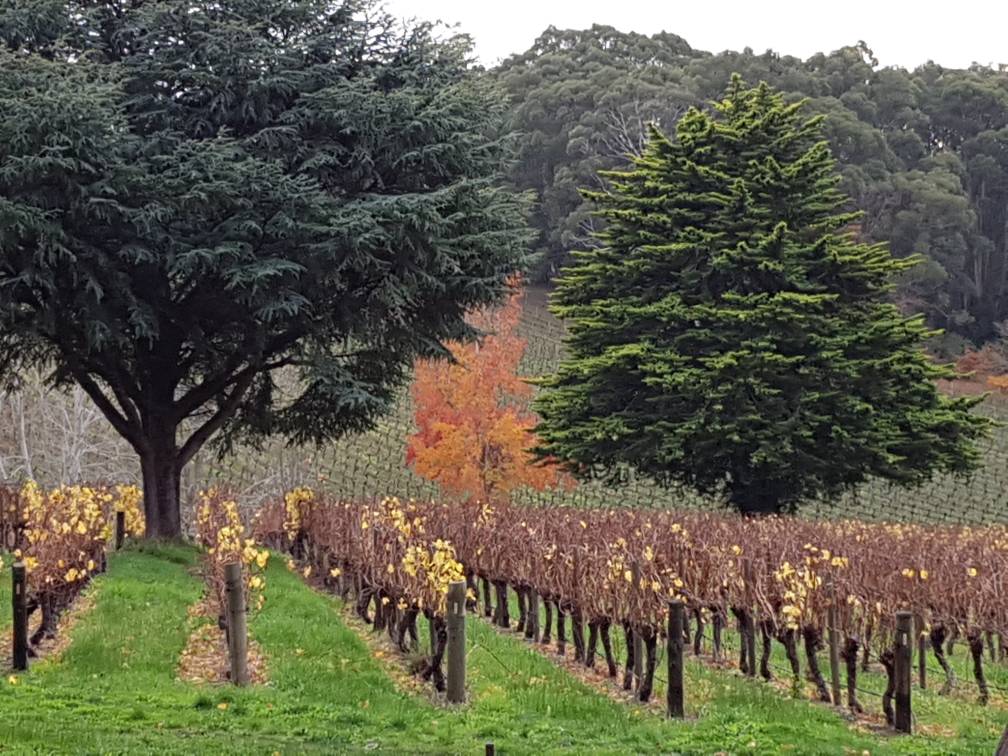 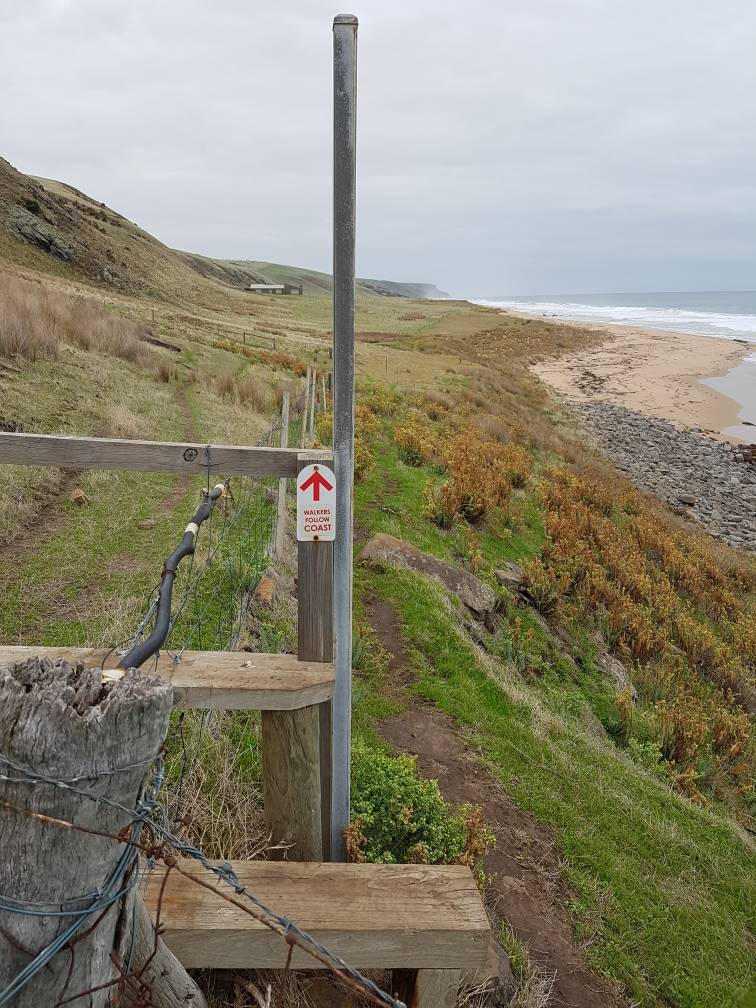 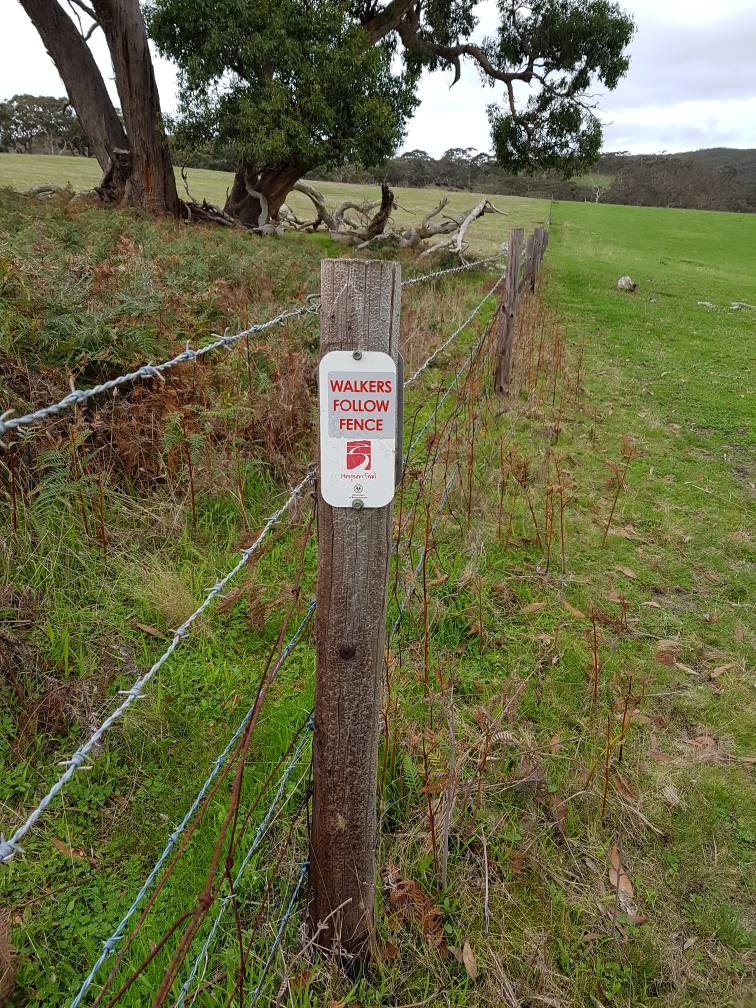 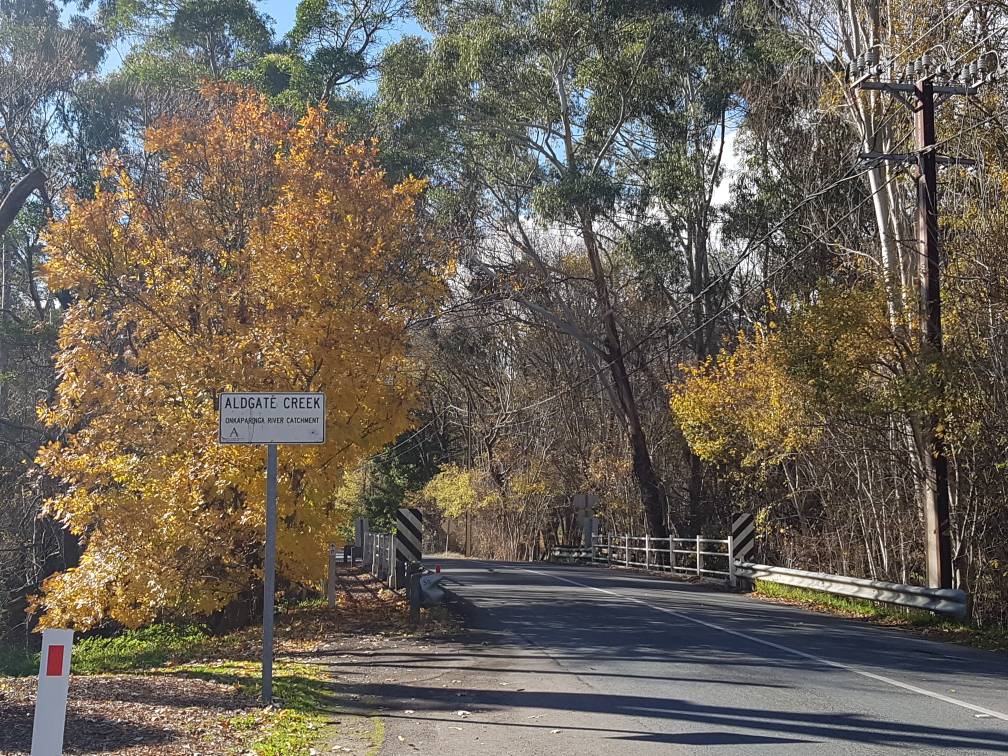 The rural environment could be quite scenic. 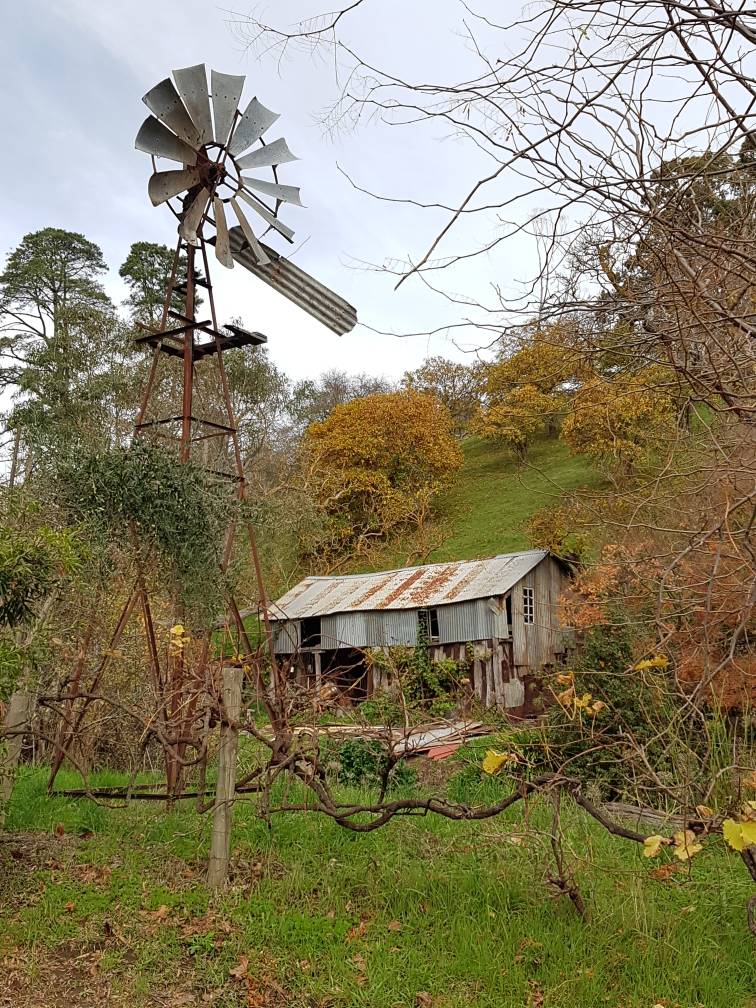 The HT bisects a multitude of other trails. 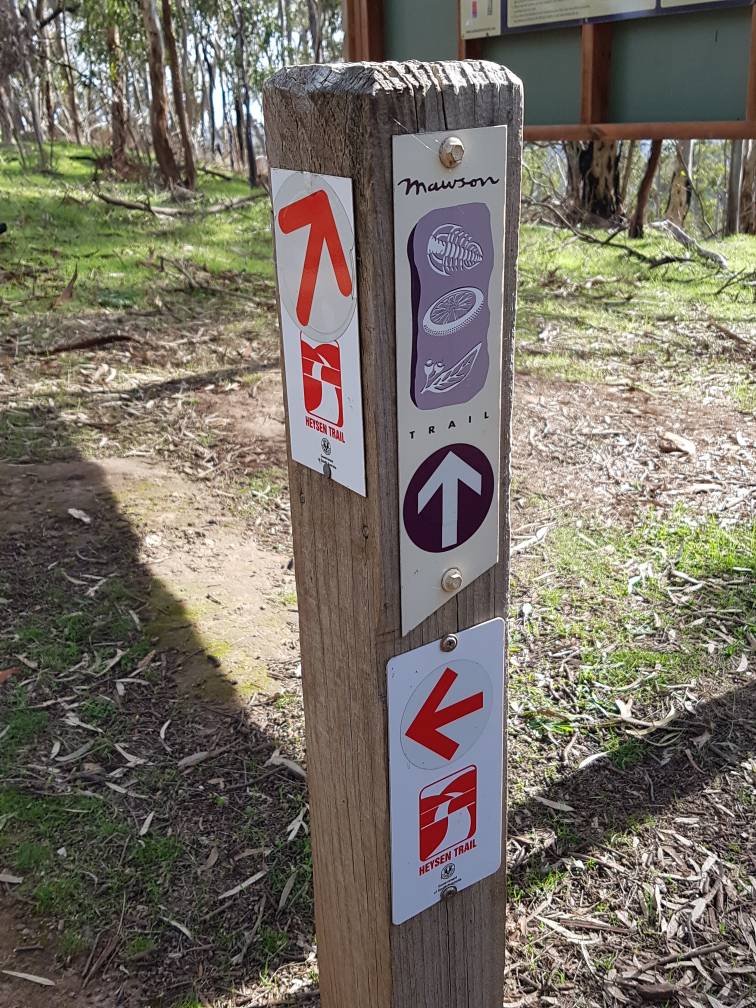 Scotts Camp in Mount Crawford Forest. A shelter, rainwater tank, picnic table, fire pit, drop loo, sheltered dry camping under pine trees AND it was FREE. Such luxury. My favorite campsite so far on the HT. 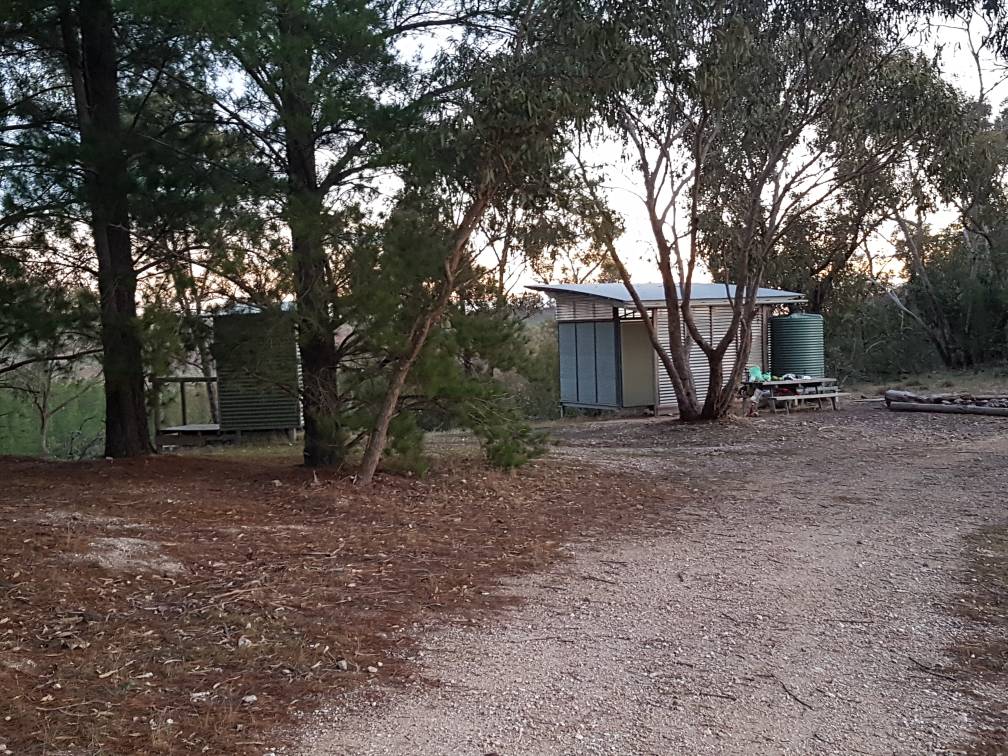 Thanks for the report Jobell. Good luck with completing the walk later in the year

Thanks Kev. Whether I get back there this year depends on a few things including how soon I run out of funds and need to get a job again, haha. I have a bad habit of buying more equipment which isn't helping! Hoping to head off in another longish walk shortly as well.

Thanks for taking the time to write it up Jobell. Some lovely scenery. Sounds like you made a good call, walk it some other time when clouds don't want to share your tent with you.
jobell

Ms_Mudd wrote:when clouds don't want to share your tent with you.

Love the way you put that.