Of the State 8 peaks, I was least looking forward to this one and didn't really have a plan to do it soon. However, an opportunity came up (via a work offsite in Port Douglas - tough days at the office!), it was the right season and it had been a dry, dry season so I figured low leach population and less chance of rain. So I arrived in Cairns at 12.30pm, picked up a rental car and a bottle of fuel from the local Anaconda, had lunch and drove down to Josephine Falls car park. Being a Sunday, the car park was pretty full. My original plan was to camp at Big Rock on Sunday night, then at the Eastern Summit camp on Monday night and walk out Tuesday. So I headed off, everything packed into a Gossamer Gear Mariposa pack. I'd read somewhere about stinging trees and a sign at the start of the track talks about neurotoxins that cause pain for months - there were plenty around, but I avoided them all. The track to Big Rock camp (and the turnoff to Broken Nose lookout) is not too bad, for a barely maintained earth track in an FNQ rainforest. It's not too steep during this part, with only a few steeper sections. There is a spot where 2 or 3 creeks come together and must be crossed via slippery boulders, but I expect it would be just basically swimming across in a wet season. Its a magic spot, deep in the rainforest there. I hadn't seen any leaches, so didn't bother putting my gaiters on. I'd pre-treated my clothes with Pyrethrin - last time I got bitten by a leach, I nearly passed out the next day as best man at a wedding. I have pretty thin blood and once they let go, I keep bleeding for hours. I arrived at about 4pm and set up camp. There are 3 pretty clear spots and 1 or 2 smaller ones, and the nearby creak provides plenty of white noise and is the last reliable water supply before going on. At this point, I found out that my stove did not work - I think a small piece of wax or grit got into when I first attached the fuel canister. I also found out that not every Victorinox army knife includes the pin under the corkscrew - I couldn't get the stove to go no matter what (got home and fixed it in a second). So I changed my plans - up and back to the campsite the next day, leaving the tent set up. Walk out early Tuesday morning for a Big Breaky in Innisfail. I had saladas with cheese and salami for dinner... There were a few mice around, but my food was hung up in a tree.

I took my Mike's Undercling sleeping bag and S2S Ultralight insulated mat in case of having to sleep in the emergency shelter. And 4 litres of water - 3 in a bladder with some electrolytes and a 1L bottle of fresh water for the return trip. A fellow hiker (in jeans) startled me at 7am as I was getting ready to head out. He was local and does the trip a couple of times a year, whenever the weather is 'just right'. He'd started from the car park at 5.30 am. I passed him just a few minutes later. The hike from Big Rock to the first boulder field is steep, at times just ladders made of tree roots, often along a ridgeline with steep drop offs and no more water. 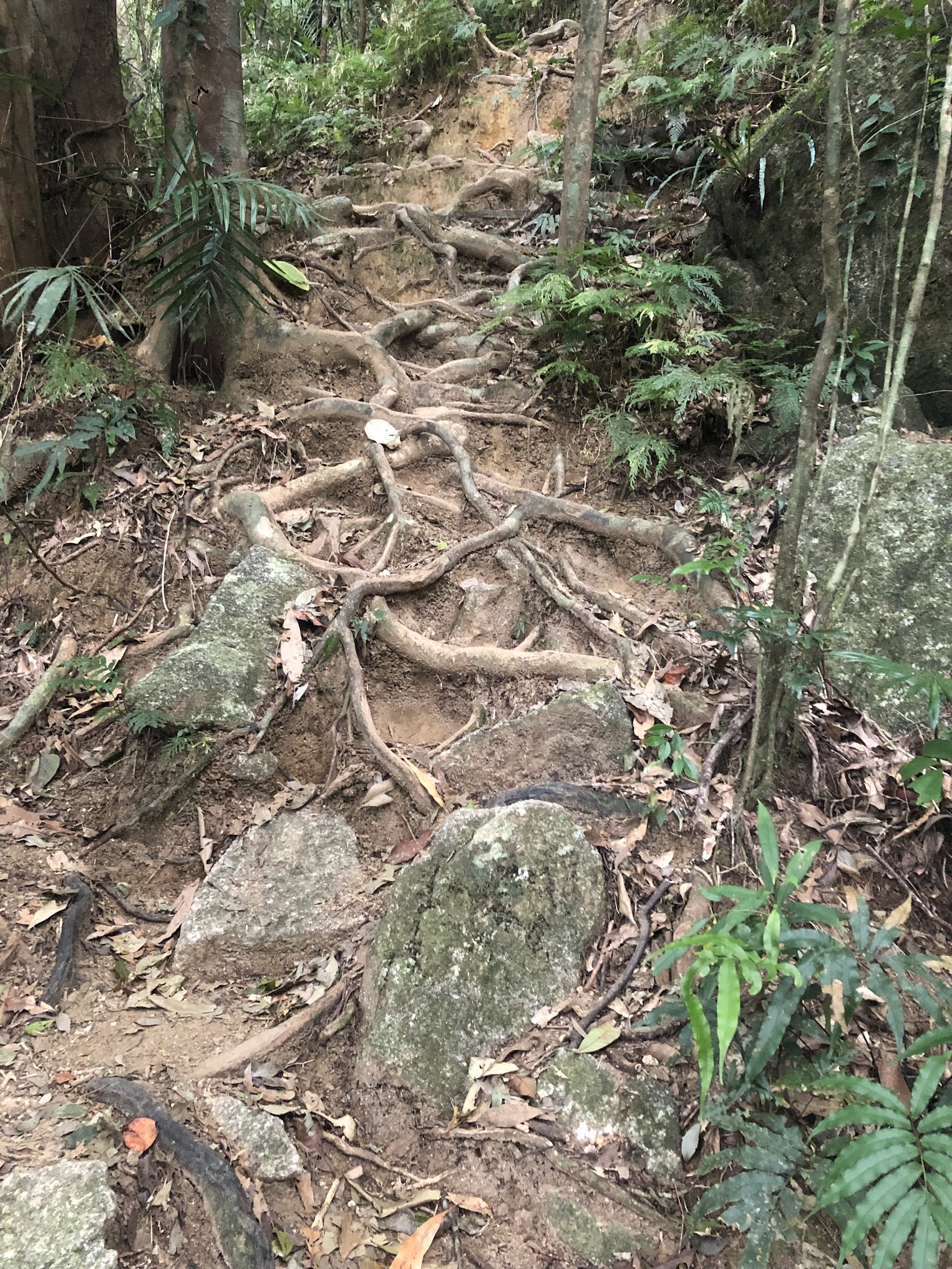 I met a couple of guys coming down who had camped up top. They did not have a good night - very windy and cold, and I was glad I decided to camp lower down. The first boulder field is over pretty quick and I reached the emergency shelter around 10.30am and had some morning tea. There is a lot of rubbish around, which is a real shame - broken tents, a 3kg gas bottle and lots of empty plastic water bottles. About 11am I headed on up into the second boulder field - it was a little windy, but otherwise perfect. The scrambling required is pretty tricky and there are big drops down that would be hard to get out of. There are some steel bars installed in some of the harder spots. Before you know it, the summit is reached. A few meters away is a boulder affording a nice view.

A few selfies, then it was time to head back down. Again through the boulder field, I found a couple of easier routes this time and going down is always easier. Back at the Emergency Hut I met up with Mr Jeans who was just about to head off to the summit, so he was about 90 minutes behind me. I also spotted someone in green shorts who had skipped the hut and was ambling up the track. With my hiking pole out, I headed back down to camp. I got back about 3pm and green shorts came through about an hour later - a Swedish girl just smashing the mountain out. Mr Jeans came through at 6pm - he had a torch, so he was good to finish in the dark, but it was a 14 hour day for him!

Back at the place where the creeks meet, I'd thrown my hiking pole across and the handle landed in a swampy area, which is probably how a got a leach on my little finger. I flicked it off before it got too settled and didn't see any more. Back at the car park on a Tuesday morning, and my car was the only one there. I changed in the toilet block and headed to Innisfail for one of the best Big Breaky's I've ever had.

In general, the track is pretty well marked - if you can't make out the track, there is usually an orange marker somewhere. My legs hurt for the next 3 days, mostly lactic acid in the quads. I try and always use a hiking pole for descents to prevent knee soreness after learning the hard way on the Milford Track 20 years ago.
Post a reply
Desktop version